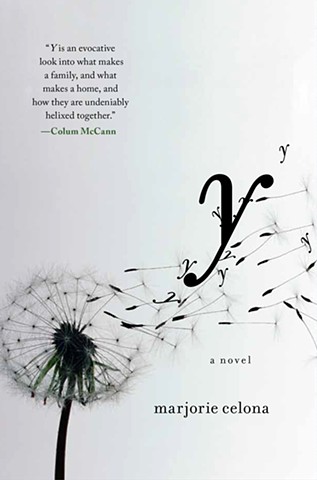 Y won France's Grand Prix Littéraire de l’Héroïne for Best Foreign Novel; was shortlisted for the William Saroyan International Prize for Writing; was a finalist for the Center for Fiction’s Flaherty-Dunnan First Novel Prize and the Dioraphte Jongerenliteratuur Prijs (Netherlands); and was selected as the #1 Indie Next Pick from IndieBound.

Y is the story of Shannon, a newborn baby dumped at the doors of the YMCA, swaddled in a dirty grey sweatshirt with nothing but a Swiss Army knife. She is found moments later by a man who catches a mere glimpse of her troubled mother as she disappears from view. All three lives are forever changed by the single decision.

Bounced between foster homes, Shannon endures neglect and abuse but then finds stability and love in the home of Miranda, a kind single mother who refuses to let anything ever go to waste. But as Shannon grows, so do the questions inside her. Where is she from? Who is her true family? Why would they abandon her on the day she was born?

“I love ambition in a novel. I love humour, audacity, perseverance, craft. And I am deeply grateful when it gets exquisitely blended in a brand new voice. Marjorie Celona's debut weaves the twin stories of a foster child's search for home and the raw account of her mother's decision to abandon her newborn. Y is an evocative look into what makes a family, and what makes a home, and how they are undeniably helixed together.” —Colum McCann, author of Let the Great World Spin

"A wee baby girl is left behind and even before she opens her eyes, she begins to describe her extraordinary world. Y is filled with heartbreaking loss and flawed heroes yet Celona's writing is filled with grace and compassion." —Heather O'Neill, author of Lullabies for Little Criminals

"Y is the story of humanity's first question: Who am I? This novel tells a pain-filled, utterly essential quest to know who one's family is. There is Oedipus. There is Pip. Now there is Shannon, compelled to search through unbearable secrets and trauma. The style is accomplished, the voice hauntingly matter-of-fact.” —Kim Echlin, author of The Disappeared

"Y is everything I'm hoping for when I open a book--suspenseful, compelling, psychologically deft, and beautifully written, with characters so alive they seem to be in the room. Marjorie Celona is a brilliant writer at the start of a brilliant career." —Leah Stewart, author of Husband and Wife

"Marjorie Celona’s Y isn’t merely an extraordinary debut; it would be cause for celebration if it were the author’s second or fifth or twentieth novel. There’s so much to relish and to marvel at: the nimbly interbraided stories of a mother and daughter trying to make sense of, and lives from, their severely straitened circumstances; the lovely, lucid, haunting prose; the subtle, precise command of tone. But above all I marvel at Celona’s clear-eyed and heartbreakingly complex depiction of her characters’ psychologies, at the empathetic attention she pays the fierce, flawed, lovable people at this terrific novel’s heart. These are indelible characters, and Y is a triumph." —Michael Griffith, author of Trophy

“I was enraptured by Shannon's fierce searching heart. I felt the aching emptiness of missing pieces and the healing of discovering one's true family. With a child's defiance, hurt and brittle vulnerability, she led me through a world littered with the abandoned, lost and broken and brought back forgiveness.” —Shandi Mitchell, author of Under This Unbroken Sky

"Richly textured, gritty, surprising and innocent, Marjorie Celona’s tale of an abandoned child explores the undercurrents of small town experience; it’s a blue collar world of courage, goodness and violence in which the coming of age of Shannon, a child abandoned by her mother shortly after her birth, is also a quest for the treasure of an identify that has to be sifted from the detritus of damaged lives. Celona has mapped place and class in a way I haven’t read before, and she has created a character with such heart that I didn’t want the story to end. Many stories quest for understanding, but few can deliver: Y delivers the goods. It’s a wonderful debut." —Marilyn Bowering, author of What It Takes To Be Human

“Marjorie Celona’s Y is the best novel I’ve read this year. A young woman’s search for her birth parents becomes, through Celona’s brightly lit prose, an unforgettable story about the nature of time itself, the way our past is always alive in the present, shaping us into who we are. With more honesty, compassion and warmth than is sometimes fashionable in contemporary fiction, this novel will stay with you long after the last page is turned.” —Anthony Varallo, author of Out Loud

“I couldn't get enough of Shannon, the charming, brave, and blistering heart of this novel. She's open to everyone she meets—mothers, fathers, the homeless, the addicted—so her story is too. Marjorie Celona has written a novel that is funny, contemporary, and heartbreaking, a novel that is in love with life.” —Deborah Willis, author of Vanishing and Other Stories Reviews

Split Decisions and That Fork in the Road New York Times, Jan 10, 2013

Y Marjorie Celona’s novel is the book of the fall National Post, Sept 4, 2012